The moment a baby girl is brought into the world, her mind is like a sponge; absorbing what she is shown and taught. As she grows and matures, her parents dream of what she might accomplish and what her personality will be like. Until one day, when she begins to dream for herself and her own future. Those hopes and dreams are usually inspired by her two greatest role models: mom and dad.

The role of the father figure in a girl’s life cannot be overstated. He demonstrates how a woman should be treated, he affirms her talents, and he dreams of a future for her that is bright with possibility. For more than a century, the Girl Scouts have been building girls of courage, confidence, and character, who make the world a better place. In a traditionally female led organization, exceptional Girl Scout Dads are taking the lead like a Girl Scout to personally encourage and empower their daughters to be women of character and confidence. 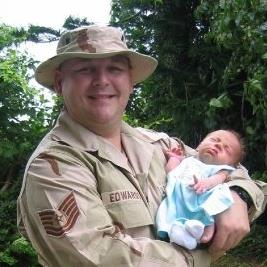 U.S. Air Force Veteran, Greg Edwards, is one of those exceptional fathers who is man enough to be a Girl Scout Dad. Greg’s heart for family and country drive him in everything he does. Greg knew the moment his daughter Ivey was born that he would do anything to help her succeed and make her happy. When Ivey became a Girl Scout 5 years ago, Greg saw how much his daughter was growing from her Girl Scout experience. Greg didn’t want to be an observer of her journey. Greg wanted to take the journey with her. He knew being a Girl Scout Dad would allow him to stand by her side as she excelled, and teach her important lessons.

When the troop decided to pursue the Bronze Award, Greg’s heart swelled with pride; not only for his daughter Ivey, but for all the girls in the troop. He taught them about carpentry and power tools so they could construct benches to beautify a local park. When the project was complete, one of the girls in Ivey’s troop decided to earn her Silver Award. Without hesitation, Greg volunteered his time to teach Kayleigh how to make shelves and benches for her Lending Library project.

Greg teaching his daughter’s troop about carpentry for the Bronze Award.

Kayleigh reflected on the impact Greg’s help made on her project, “It made me feel so confident to have someone of his expertise helping me.”

Greg dedicates himself to being a positive male role model for every girl of his daughter’s troop. He helps in any way he can, and loves to share his knowledge with the girls. Greg’s time in the military instilled in him a deep sense of tradition. He wanted to share his patriotism with the girls, so he taught them how to properly fold a flag, march in a military formation, and to recognize cadences. It is his goal to give them experiences that go beyond traditional female roles.

Greg’s wife, Jennifer Edwards, shared his story with us. Jennifer has this message for her husband,

“My husband, Greg Edwards has been a huge part of our troop, and has helped any time we have needed it. He even indulged Ivey and me and took us to the Juliette Gordon Low Birthplace on our family vacation. He has been there to support Ivey and offer guidance when she needs it. Thank you for asking what the dads have done for the troop. They tend to be the unsung heroes as we moms are in the forefront of the scouting experience with our girls.” 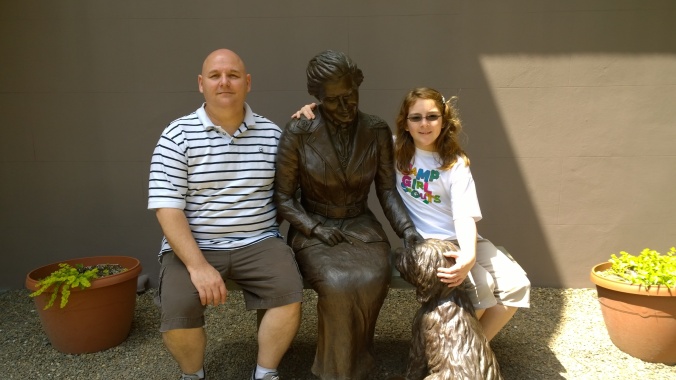 Greg and his daughter Ivey at the Juliette Gordon Low house.

While Father’s Day is past, we want to celebrate our Girl Scout Dads who exhibit exceptional leadership and heart all year round. It is men like Greg who are having a life changing impact upon girls everywhere. Thank you for your commitment to building girls of courage, confidence, and character, who are making the world a better place. Thank you for your service to our country, and the sacrifices you have made. The Girl Scouts would not be the same without you.

To join the movement, and become a Girl Scout Dad, click here.

We want to hear your stories! Whether you know an amazing volunteer that deserves to be recognized, have been involved in an exceptional service project, or any other aspect of the Girl Scout Experience we want to help you share it with the world! Email me at, mtaylor@gssc-mm.org with your story and photos.

The Girl Scout Experience isn’t something that can be packaged into a box, or sewn on a vest. It’s the voice that tells you nothing is impossible even when the crowd is demanding your defeat. It’s the drive that keeps you going when even when you stand before a mountain. It’s that passion that burns inside your heart and cannot be snuffed out. Our Girl Scout Alumnae know this better than anyone. Because it is after a girl graduates and begins her journey as an adult that she discovers just how much being a Girl Scout has shaped her life.

Amber Woods walked across the stage at Anderson University in May 2016, as a proud Girl Scout Alumnae and college graduate. Each step she took represented the years of hard work, dedication, and heart poured into this moment. Receiving her degree meant more than just the completion of college. Her diploma meant the opportunity to finally begin teaching children with special needs; the calling she discovered when she was a child herself. During our recent interview, Amber told me the story of how her Girl Scout Experience led her to her calling and changed her life forever:

Amber recalled, “While in scouting as an elementary student, I participated

Amber as a Brownie with her mother, Cathy Woods.

in the Special Olympics for the first time.” This was a day she remembers as one of the most pivotal days of her life. As Amber cheered on the participants, and interacted with each of them individually, a passion sparked a fire in her heart that has fueled her ever since. As she encouraged and congratulated the participants, she saw something in their eyes that inspired her in a profound way. Amber knew she had found her calling. As she grew and matured with time, Girl Scouts became more than just cookies and badges. It began to represent her future and the mark she wanted to make on the world. As a senior in high school, Amber began to work towards the highest award that a Girl Scout can earn: the Gold Award.

The founder of Girl Scouts, Juliette Gordon Low, created the Gold Award in 1916. Low instituted this award at a time when women weren’t even allowed to vote. However, Low wouldn’t accept that reality. Instead, she envisioned a world where the voice of girls was no longer hushed, but encouraged to speak out loud enough for the world to hear. To earn the Gold Award, a Girl Scout must create and execute a service project that has a positive and sustainable impact on the community.

That is exactly what Amber did. She created an outdoor sanctuary at a battered women’s shelter. Women who were so accustomed to hiding from society were able to enjoy the sun and flowers because Amber built them a privacy fence blocking the view of the road. She constructed picnic tables and planted flowers so the women would have a place of beauty and relaxation to escape to.

As a result of her Gold Award, Amber received a leadership scholarship that allowed her to begin her college career. Amber had this to say about her Girl Scout Experience:

“I was able to learn a variety of skills, but the most important of these included those that I carry with me through both my personal and professional life. This included leadership, the importance of service, respect for others whose paths differ from my own, and love for all people no matter their circumstances.”

The legacy of Juliette Gordon Low lives on in girls like Amber, who share her vision, and live with a heart of gold; the heart of a Girl Scout.

What dreams do you have? Let us help you reach your goals and build lasting leadership with the Girl Scout Experience. Join today to begin making new friends, learning new things, and building important skills. Click here to learn more.

To share your story, you can email me at mtaylor@gssc-mm.org